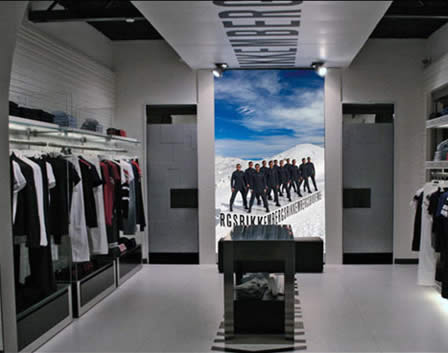 Over recent weeks, Dirk Bikkembergs opened a first Bikkembergs in-store corner at the Liberty department store in Naples. The opening introduces a new in-store concept, which will be applied across more locations in the near future. It follows in the wake of the recent opening of a Dirk Bikkembergs store in Livigno.

The new in-store concept follows shortly after the opening of the Dirk Bikkembergs mono-brand store in Livigno, a popular destination in the Italian Alps. The Dirk Bikkembergs store has a prime location at the centre of Livigno and covers some 150 m2.

Both the in-store concept and the Livigno store take their inspiration from the Bikkembergs floor at Manzoni 47, the brand’s Milan flagship store, which was originally conceived as a blueprint for all future retail projects.

With the opening of increasingly more dedicated retail spaces, the brand is taking its unique approach deeper into the market, thus offering the end-consumer greater exposure to the full brand experience.

In addition, the brand announces the opening of a new mono-brand store in the historic heart of Verona by autumn this year.