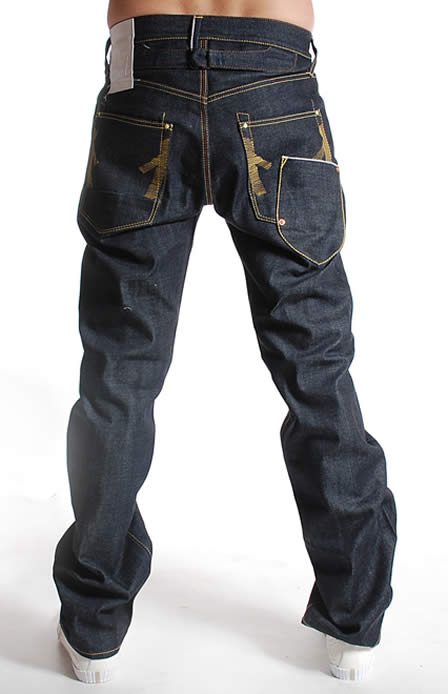 In todays denim market we are spoilt for choice. And now that Nippon has (finally…) been ”discovered” by indigo affecionados & the land of the rising sun shines brightly on the blue horizon as the current focus in the premium denim world, we should perhaps be reminded that genericism is not strictly confined to the East. At Ijin they use the letters D.O.C ,very carefully & very quietly (whilst maybe they should speak them a little bit louder). At least just loud enough to be heard over the current cacophony about the japanese labels….

To explain ”D.O.C” ia an abbreviation of denominazione originale controllato in Italian ( & in French is almost identical ) meaning guaranteed as original or basically the ”Real Mckoy” ( in olde-speake denim slang).So, as a living & breathing example of an original, here is the Ijin Belt-Back Six (in nipponese 14 ounce akamimi…what else)

Like all true denim classics, this item flies the heritage jeans-making flag in sewing specs & details & like all true Ijin classics it carries the Phil Ijin touch & interpretation to transform the classic into a generic model.But just enough to customize history without making it unwearable or ( heavens above ) ”fashion”. The sixth pocket is the most obvious element here, a detail taken from a regenerated vintage Baseball Pitcher’s shirt some time ago , but also serving as the branding itself. A ”victorian” belt style (an ironic pseudonym obviously as there is no monarchy in the US ) is added in the Ijin signature style, in itself quite anonymous , whereas its real purpose is not only to show that you know your onions , but to display the beautiful sewing skills of the Ijin Italian workshop & the way in which the belt lies flat against the back without interfering with the yoke line, nor creating the merest pucker as it is inserted cleanly into the waistband.

Further more there is the solid-cast, single piece belt ”buckle” & those tight & over-long, indigo thread bar tacks that melt back in colour with the natural wear of the garment.Not to mention that standard Ijin triple needle seat seam….

So remember, that in a denim world where you have to shout to be heard,independent indigenous indigo items exist, quietly & patiently waiting in the wings,unsung Blue Heroes, as authentic as the rest & as beautiful as the best.

And ”guaranteed as original”. 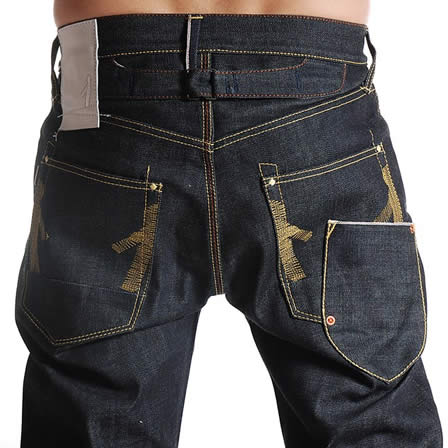