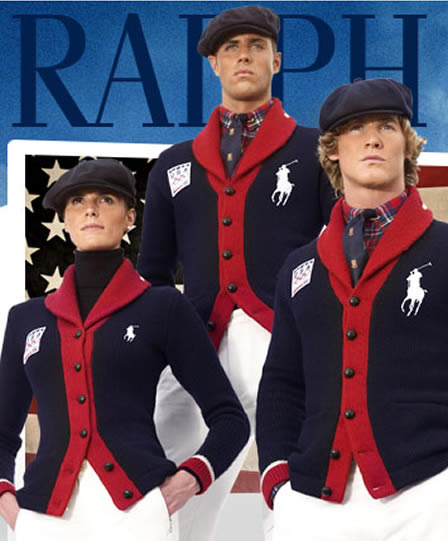 Colorado Springs, Colo. – Polo Ralph Lauren celebrates the commencement of the 2010 Olympic Winter Games in Vancouver with an unveiling of the official U.S. Opening Ceremony Parade Uniforms to be worn on February 12, 2010. As the proud outfitter of the U.S. Olympic and Paralympic Teams, the Company has designed the Official Opening Ceremony and Closing Ceremony Parade Uniforms as well as a unique collection of village wear apparel and accessories.

“It is a proud moment for us to watch these esteemed athletes as they walk out onto a global stage representing America in front of billions of people worldwide,” said David Lauren, Senior Vice President of Advertising, Marketing and Corporate Communications.

The Opening Ceremony Parade Uniform for both men and women are vintage-inspired and modern in design with a functional cotton fleece pant, a navy and red down jacket, a classic cable turtleneck, and a traditional wool hat adorned with American flag adding a distinct feel of patriotic spirit.

“Polo Ralph Lauren has outfitted the team with a timeless look – one that fellow Americans will be proud to wear,” said Lisa Baird, USOC Chief Marketing Officer. “They truly understand the honor bestowed upon Team USA athletes who will represent our nation at the Olympic and Paralympic Winter Games in Vancouver.

The 2010 U.S. Olympic Team Collection consists of authentic sporting apparel which embodies the spirit of American athleticism and sportsmanship. Celebrating the rich history of the Olympic Winter Games with a nod to the Lake Placid Games of 1932, the clothing will showcase a classic Americana and patriotic palette of red, white and blue.

The U.S. Olympic Collection for men, women and children will be available for sale in Polo Ralph Lauren retail stores, Ralphlauren.com, and exclusively at select department stores in the U.S. and Canada.

This announcement reinforces Polo Ralph Lauren’s leadership in major sporting initiatives. In addition to the Company’s involvement with the U.S. Olympic and Paralympic Teams, the company serves as the Official Apparel Sponsor for both Wimbledon and the U.S. Tennis Open. Polo Ralph Lauren currently also sponsors an elite roster of professional golfers, as well as the Blackwatch Polo Team.

30% OFF Togged.com for Cyber Monday

The evian bottle by Courreges