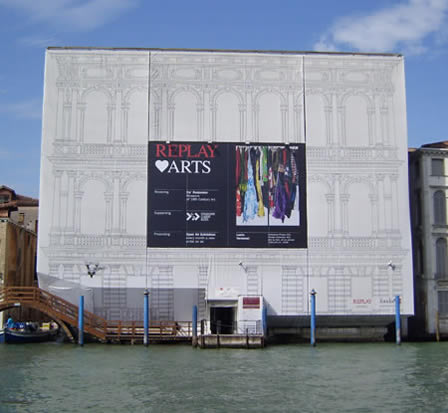 Italian jeans wear manufacturer Replay will host an open air exhibition of works by emerging artists, on the facade of the Museum of 18th Century Venice. The company behind Replay and We Are Replay brands, continues the support and fund Fashion Box as part of the Imprenditori Illuminati ‘… near Venezia’ project, the restoration of the facade of Ca’ Rezzonico, which houses the Museum of 18th Century Venice.

Replay has been actively involved in the promotion of art throughout the world, both through its own initiatives and combined with those of the Venice-based Claudio Buziol Fondazione. Launched in 2006, the foundation aims to provide crucial support for young people to enable them achieve their ambitions. By helping younger generations to develop their creative skills and artistic expression, the foundation goal is to offer young artists greater exposure.

The ‘Replay loves Arts’ venture along with the open-air exhibition is part of the Claudio Buziol foundations commitment to art based developmental projects. Not choosing for a huge billboard which covers the facade of Ca’ Rezzonico during restoration work, it will provide a blank canvas every month for young emerging artists to showcase their work. As well as being featured externally on the outside wall of the CA’ Rezzonico the artist’s work, will then be exhibited in its original form inside the Museum.

At the end of each monthly residence, the billboard will be reused to create original bags made by the Rio Terà de’ Pensieri Cooperative, made up of volunteers and prison inmates, giving the operation a social purpose as well. Bags will be sold in the Venice Replay Store and the proceeds will go to the Claudio Buziol Foundation.