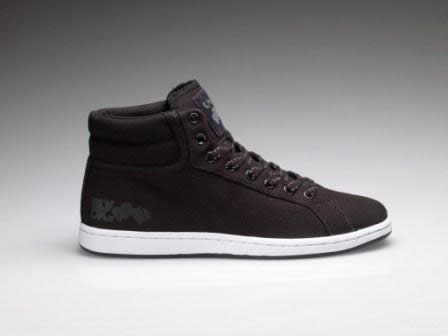 Steph.Cop is a mysterious designer from the French street culture scene. Graffiti artist, graphic and fashion designer, he is famous for co-founding the street wear labels Homecore and Lady Soul as well as for his designer toys “ARO” (Analyse.Reflex.Obsessional).

His latest Feiyue offering, an exclusive limited edition Steph.Cops’ sneaker, is directly influenced by his new work, which is inspired by Mother Nature’s gifts. Cop recently released a series of oversized chain saw carved wooden Toyz (giant sculptures entitled “Wooden ARO”) exhibited in various venues in France. Cop’s take on the Feiyue lo and 10N 28E is simply yet effective, black with contrasting laces and a stylised chainsaw symbol on the tongue.

Feiyue launched in the UK in 2009 but was born in 2006, after being bought from its Chinese owners by a French team of globe trotters. However the brand dates back to the 1920s; it was the standard footwear in China, worn by every social class from the politician to the countryman. The brand is constantly evolving as the founding team is always on the look for new challenges, collaborations and inspirations, teaming up with like-minded artists and brands each season; previous collaborators include luxury house Celine and artist Bret Westfall to name a few.

If you are based in London – Feiyue is available at the Hentsch Man pop-up shop until December 23rd, Unit 15, Princes Arcade (which runs between 190-196 Piccadilly and 36-40 Jermyn Street London W1). It’s definitely worth a visit!