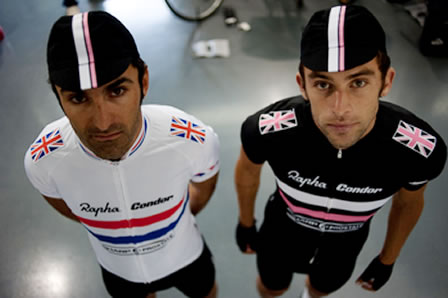 Paul Smith Jeans are pleased to announce that they have become a sponsor of the Rapha Condor Professional Cycling Team, home to the current men’s national road race champion for the rest of the 2009 season.

The Paul Smith Jeans logo will debut on the Rapha Condor team jerseys and Kristian House’s National Champion’s jersey at the Tour of Ireland in August where they will line up against Lance Armstrong, comeback kid and recent third place finisher in the Tour de France

Paul is a well known cycling enthusiast and has worked with Rapha on a number of cycling related projects in recent years. However, this is the first time that the Paul Smith brand has appeared on the jersey of a professional cycling team. Adding Paul Smith Jeans to the black Rapha Condor jersey will cement its reputation as the most stylish in the peloton. The Rapha Condor team will be wearing Paul Smith Jeans going forward, underlining the new partnership.

Speaking on behalf of the team, Rapha founder and CEO Simon Mottram expressed his enthusiasm for the new sponsorship:

“For Paul Smith to choose cycling as a vehicle for their sponsorship activity is a hugely important moment for the Rapha Condor project. The sport has been growing rapidly over the last few years but it has taken the big brands a while to act on the opportunity that cycling has to offer. The brands that have joined the team for the rest of the year have seen the synergy between the Rapha and Condor brands and their target audience and we’re looking forward to working with them this year and, hopefully, beyond”