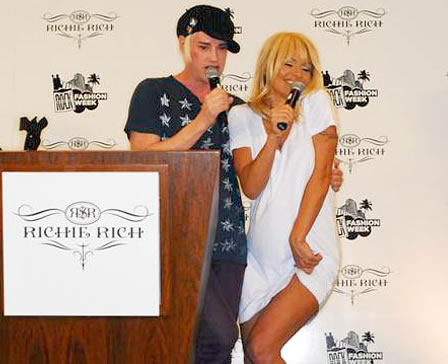 Pamela Anderson decides to follow the NOHARM lead too….

Pamela Anderson joins the ranks of celebrities-turned-fashion designers. The Baywatch actress is teaming up with Richie Rich to design environmentally-friendly apparel, after having recently been seen modeling on the Richie Rich catwalk during New York Fashion Week.

Anderson is also well-known as a PETA supporter and animal rights activist. It should then come as no surprise that her eco-friendly clothing line with fashion designer Rich will feature such items as leather-free shows. The new brand will be called Muse with the line will otherwise consist mostly of casual, ready-to-wear apparel made from environmentally friendly materials. The first Muse fashion collection will debut this summer 2009.

Anderson said, “I really don’t like to wear clothes. I would rather go naked. But I love Richie’s designs, so I agreed to be part of Muse.”

Rich said, “Pamela is an outdoorsy and summer kind of girl who I have been friends with forever. We share the same wild and crazy aesthetic. And she has long been my inspiration. Even though Pam prefers not to wear clothes, she looks great in sexy dresses. She reminds me of Marilyn Monroe and Bridget Bardot.”

The former Heatherette designer isn’t the only one finding inspiration in Pamela Anderson: fashion designer Vivienne Westwood asked the actress to be the face of her Spring/Summer 2009 ad campaign and included Anderson in her Paris Fashion Week catwalk show for her Vivienne Westwood Red Label collection in early March.