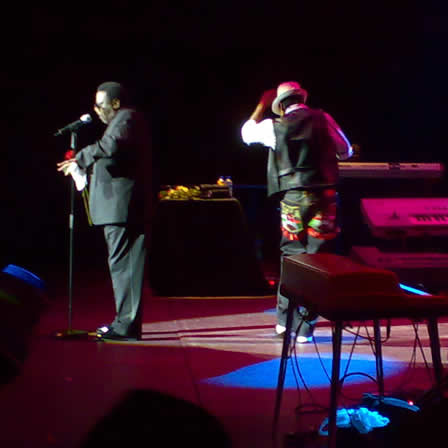 During a sell-out show at London’s Royal Albert Hall, on 6th November 08, members of the Reverend Al Green’s band and dancers were seen rocking Red Monkey Jeans on stage. Shown is the Tengu design:

Tengu (Tengu “heavenly dogs”) are a class of supernatural creatures found in Japanese folklore, art, theater, and literature. They are one of the best known y?kai (monster-spirits) and are sometimes worshipped as Shinto kami (revered spirits or gods). Although they take their name from a dog-like Chinese demon (Tiangou), the tengu were originally thought to take the forms of birds of prey, and they are traditionally depicted with both human and avian characteristics. The earliest tengu were pictured with beaks, but this feature has often been humanized as an unnaturally long nose, which today is practically the tengu’s defining characteristic in the popular imagination.

Buddhism long held that the tengu were disruptive demons and harbingers of war. Their image gradually softened, however, into one of protective, if still dangerous, spirits of the mountains and forests. Tengu are associated with the ascetic practice known as Shugend?, and they are usually depicted in the distinctive garb of its followers, the yamabushi

tengu mikoshi (portable shrine) in the city of Beppu, ?ita Prefecture, on Ky?sh?. The Shasekish?, a book of Buddhist parables from the Kamakura period, makes a point of distinguishing between good and bad tengu. The book explains that the former are in command of the latter and are the protectors, not opponents, of Buddhism – although the flaw of pride or ambition has caused them to fall onto the demon road, they remain the same basically good, dharma-abiding persons they were in life.

The tengu’s unpleasant image continued to erode in the 17th century. Some stories now presented them as much less malicious, protecting and blessing Buddhist institutions rather than menacing them or setting them on fire. According to a legend in the 18th-century Kaidan Toshiotoko (Kaidan Toshiotoko), a tengu took the form of a yamabushi and faithfully served the abbot of a Zen monastery until the man guessed his attendant’s true form. The tengu’s wings and huge nose then reappeared. The tengu requested a piece of wisdom from his master and left, but he continued, unseen, to provide the monastery with miraculous aid.