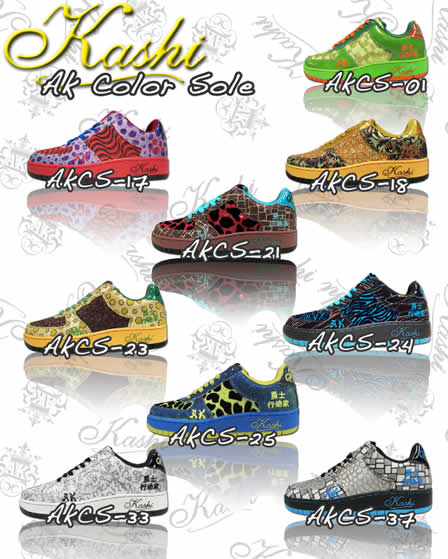 During 2008 Kashi has been making some noise with their “bling-magic” footwear and accessories. The style is unashamedly loud and simply demands attention! Here’s their story:

For over four generations since the era of the 19th century the Kashi name has been bringing bling to the world. From old Jerusalem in the 1930’s to the streets of Brooklyn, New York in 1982 when the Kashi name was first brought to America, Kashi Jewelers has redefined the attitude and style of a fashion generation. Jewelry has always been a statement for fashion. They have served many different entertainment stars, professional athletes, and the general public.

Alan Kashi – a.k.a ‘AK’ – had a vision that his and his family’s collection of jewelry would later expand into Hip-Hop fashion in a way that would revolutionize an entire industry. His entrepreneurial talents were exhibited at an early age.

With the early support of Meanstreet Entertainment and Pittsburgh’s own R&B sensation CRAVE, Kashi Kicks quickly became one of the leading selling urban shoe lines, setting fashion trends initially for young Americans throughout all of Pittsburgh &amp; Western PA. KashiKicks popularity has extended beyond the inner city, building on the success of suburbia as well as the urban area. Kashi Kicks Inc. insures the customers and consumers that we only use the finest quality materials to manufacture our product as well as the finest press to promote the product and take it to highest standards of the shoe industry. These standards, set from the early days of the jewelry company are now instilled in the Kashi Brand, the AK Collection By Kashi.

The Future: a collaboration of attitude, hustle, style, stress, crave, ambition, fashion, direction and jewelry wrapped up into one sneaker; KashiKicks.

Dizzee Rascal wear RMC on Top of the Pops