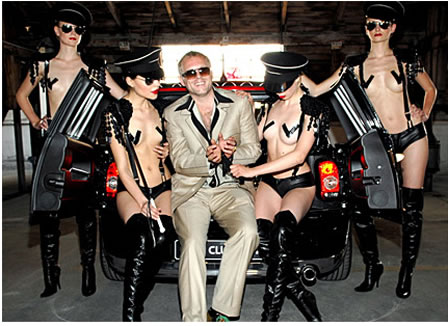 The son of punk pioneers Malcolm McLaren and Vivienne Westwood, Corre has launched a new menswear boutique in East London devoted to selling his “Terrorist” clothing line and a range of collected artifacts. First question has to be why Corre and not McLaren-Westwood?… and the second question: is this an extension of his father’s Great Rock n Roll Swindle? Come on Joe, that’s even too obvious for the the dumbest of the dumb… but hey, if you can pull it off good luck to ya!

“I suppose I’ve always grown up around the idea of starting a shop in order to start a scene,” says Corre, whose designer mother has been on the edgy frontline of fashion for decades and whose father managed the Sex Pistols.

When Corre is asked how it is he thinks that people will want to wear garments bearing the label “Terrorist,” he rolls his eyes and fires back: “because it just sort of signifies that they’re awake.”

“It’s just a word that’s used to describe the enemy. You know, who they don’t want you to like today, but maybe those same people they wanted you to like yesterday,” Corre said.

The 40-year-old punk progeny says the fact that he was given his paternal grandmother’s surname has been an advantage as “both of my parents names are a lot to live up to” but if anything, he has built on the family tradition of combining fashion with attitude.

When Corre was offered a royal honor in 2007 to recognize the success of the Agent Provocateur luxury lingerie chain which he co-founded with his ex-wife, he rejected the title, saying that the then Prime Minister Tony Blair was “morally corrupt.”

When his mother decided to use her return to London Fashion Week earlier this year to protest against the U.S. government’s continued use of Guantanamo Bay, Cuba to detain foreign suspects, Corre’s lingerie chain designed underpants for the lead model which read “fair trial my arse” across the backside.

Corre insists he hasn’t been intimidated by moving into terrain that has traditionally been his mother’s turf.

“She’s been down to this store and she loved it,” he said. “Essentially, at the root of all that’s where I come from, where she comes from. It’s the idea that you lead a much more interesting life when you dress up.”

The clothes themselves are the work of designer Simon Armitage, better known by his nom de plume “Barnzley.”

“I wasn’t particularly enamored with calling it Terrorist at first but after a couple of days of rationalizing…I kind of understood it,” Armitage said.

The word now adorns the label on the inner collar of traditional Teddy Boy’ suits, day-glo camouflage jackets and t-shirts bearing the images of some of history’s bogeymen such as Geronimo and Napoleon.

Armitage also helped with the design of the store, built to resemble a Victorian slum and named ‘A Child of the Jago’ after the 1896 bestseller by Arthur Morrison.

“We wanted to do something that was relevant to the history of this whole area,” says Armitage, motioning towards the large mural of William Hogarth’s Gin Lane’ on the back wall.

Situated in the shadow of a new skyscraper and next to a construction side for a new Underground station, A Child of The Jago does stand apart from its surroundings.

Armitage said they deliberately decided not to launch a Web site for the label in order to draw people to the store.

“It never stopped me as a little kid going to Vivienne’s shop (on the Kings Road) to buy punk rock gear…I lived miles away. London might as well have been on Mars when I was a little kid.”

Corre said that everything today is too available and reveled in the eclectic assortment of items he has collected from a chain mail suit to a prosthetic leg previously worn by a member of the Hell’s Angels motorcycle gang.

“We’ve got an original Eskimo, Inuit bow and arrow,” Corre said from a spot in the shop between a stuffed boar and the second hand books section of the shop.

“We have a Hell’s Angel’s leg here. They’re terrorists right? They cause mayhem and frighten everybody,” Corre said.

Corre insists the store is no vanity project and that the shop needs to sell its unusual wares to survive.

“This is not some kind of scout’s hut shop for us to just have a bit of fun in,” he said.

But wild success with the sale of such unusual one-off items could put him in a bind of a different kind.