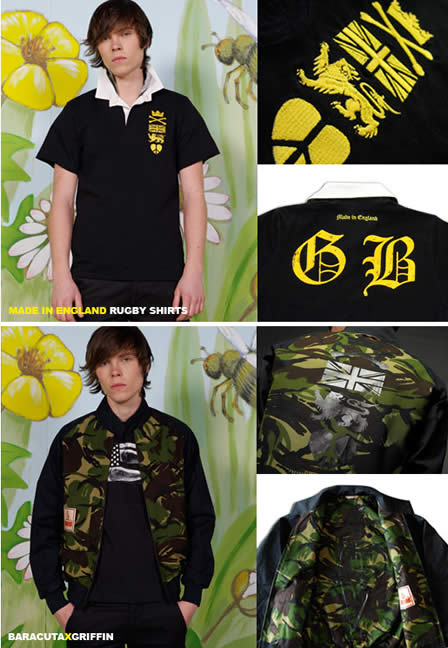 â€œGriffin moved out of London 7 years ago into the countryside, this brought about a different approach and outlook on life.

At Griffin weâ€™re working closer to home; yes we still manufacture in Italy because they have different skills to those found in the UK.

I have been looking for new and old manufactures based in England who still have the traditional skills that are reflected in patterns, fabrics and construction â€“ quality.

We are promoting today just 2 of our MADE IN ENGLAND products.

The Griffin British re-shaped Rugby short sleeve shirt which was made close to Nottingham. It has a cut away collar with a stand construction and plays with the British army camo detail underneath.Â  The quality is great; trust me I have 3 of them, itâ€™s a great change to the t-shirt and can be worn under any jacket.

TheÂ  Baracuta G9 jacket was made in London . It is black on the outside with the Griffin embroidery and the reverse has British army camo . We always love the inside out idea, this is why we have left the Baracuta label on.

Next season we have developed and expanded the â€œMade in Englandâ€ range even furtherâ€.