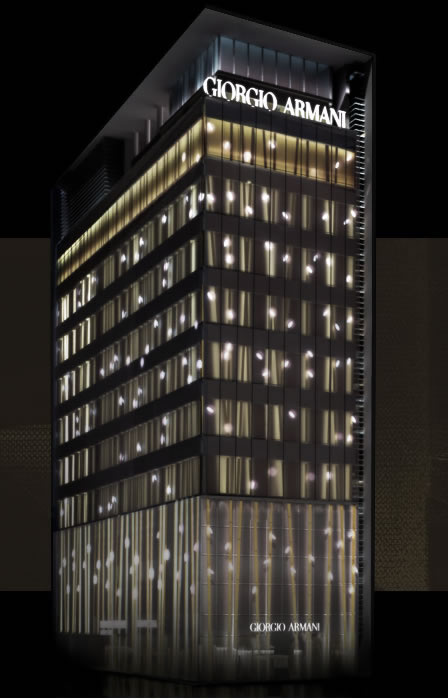 The Armani Group announces that Giorgio Armani arrived in Tokyo for a series of events coinciding with the opening of his new 6,000 square metre Armani / Ginza Tower concept store. Located at 5-5-4, Ginza, Chuo-ku in the heart of the world renowned Ginza fashion retail district, the distinctive new building has been conceived to become one of the districtâ€™s most significant architectural landmarks, not only for its construction (reaching the areaâ€™s maximum allowed height of 56 metres), but also for its exterior and interior design, which Giorgio Armani has developed in collaboration with the leading Italian architects Doriana and Massimiliano Fuksas.

The imposing Armani/Ginza Tower is the fourth in a series of unique concept stores, which Giorgio Armani pioneered in 2000 when he opened his Armani/Manzoni store in Milan – a destination fashion and lifestyle retail experience, offering his Emporio Armani and Armani Jeans fashion and accessories collections, his Armani/Casa home interiors collection, a Nobu restaurant, an Emporio Armani CaffÃ©, an Armani/PrivÃ© nightclub, a flower shop and bookstore and a fragrance and cosmetics counter. Two further concept stores followed: Armani/Funf HÃ¶fe in Munich and Armani/Chater House in Hong Kong.Â  The recently announced Armani/Fifth Avenue will become the fifth concept store, when it opens in New York in Autumn 2008.