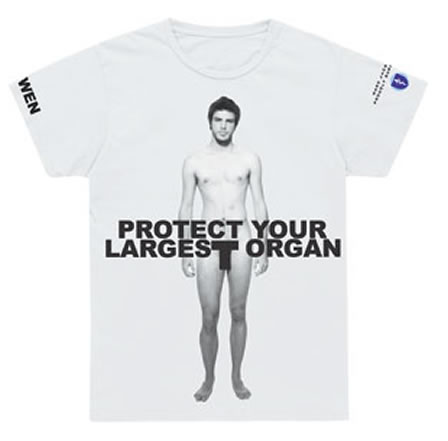 WWD NEWS: “Flesh will be the theme at Marc by Marc Jacobs this weekend. The men’s store at 382 Bleecker Street in Manhattan will feature unclothed staffers Andrew Weyer, Kyle Avila, Chico Clark and Owen Marvel signing and selling T-shirts of themselves to benefit the New York University School of Medicine, Interdisciplinary Melanoma Cooperative Group. The four men won’t be totally nude, but are expected to cover their private parts in some way, perhaps with the T-shirts. “They compete with each other about who can sell the most T-shirts,” Marc Jacobs’ business partner, Robert Duffy, said. “So I said, ‘why not autograph them and appear naked on Saturday,’ and they just said, ‘OK.'”

Duffy and Jacobs were inspired to reprint most of the T-shirts from their 2006 initiative after being honored at the NYU Cancer Institute Gala earlier this month. The duo is also adding new ones featuring Heidi Klum, Helena Christensen, Alison Lohman and Joss Stone. Duffy hopes to raise about $500,000 with this new batch of $35 T-shirts, which will also go out to other Marc by Marc Jacobs stores worldwide.

Nudity, of course, is becoming quite a theme with Jacobs, who recently showed much skin in magazines like W, Out and Visionaire.

“This [initiative] started a long time ago, but Marc’s personal nudity is just a recent phenomenon,” Duffy said. “It’s interesting that he didn’t pose [for the T-shirt] this year. I think he’s overexposed.”