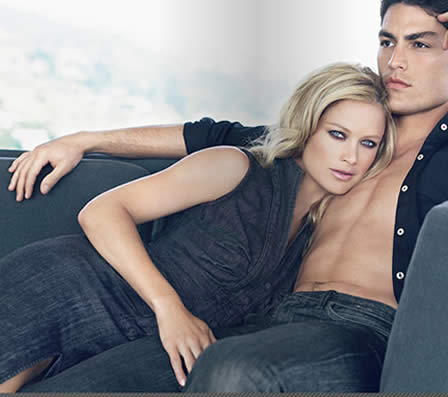 The story of premium denim is one that is intricately intertwined with the launch of 7 For All Mankind in Los Angeles, California in the Fall of 2000. 7 For All Mankind was the first company to truly bring premium denim to scale, marking Los Angeles, California as denimsâ€™ venerable center for research and development worldwide changing the landscape of denim forever.

7 For All Mankindâ€™s premium jeans literally exploded onto the scene, quickly earning critical acclaim and an immediate following for its innovative us of fits, fabrics, and finishes in denim. Sales for the first year reached a staggering $13 million, an unheard of figure in the denim market, and has continued to show exponential growth year after year. In the past seven years 7 For All Mankind has become both an established modern classic for its sophisticated fits as well as a leading trendsetter for its newest fashion forward washes and designs.

The brand, famously dubbed â€œSevensâ€ by fashion editors and stylists, grew to fame in no small part because it became an instant favorite among Hollywoodâ€™s elite. 7 For All Mankind jeans continue to rank as a preferred jean among Hollywoodâ€™s leading ladies such as Angelina Joile, Cameron Diaz, Jennifer Garner and Liv Tyler. Male celebrities such as Jake Gyllenhaal, Ben Affleck, and Ryan Reynolds became fanâ€™s of the brand shortly after the launch of the 7 For All Mankindâ€™s menâ€™s collection in 2002.

The company continues to grow and evolve as a true denim lifestyle brand, expanding its product line to include menâ€™s, sportswear, handbag, footwear and kids collections. The brandâ€™s offerings also continue to expand through innovative collaborations with highly regarded designers such as The Great China Wall, Zac Posen, Azzedine Alaia, Evan Yurman and Pucci. Exciting partnerships that push the envelope of design and creativity are now a signature part of the brandâ€™s exploratory endeavors. 7 For All Mankind continues to merge the worlds of denim and couture to redefine the fashion landscape. The brand is currently sold at luxury retail stores such as Barneys New York, Neiman Marcus, and Saks Fifth Avenue as well as high end specialty boutiques in over 80 countries throughout the world.