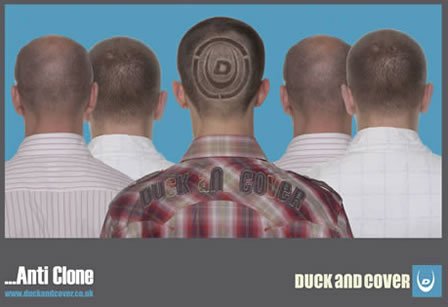 Love it or hate it, Duck and Cover is a brand going from strength to strength. Although initially conceived as a brand which would grow organically by word of mouth, recently Duck and Cover has been conspicuous by its advertising which is clearly geared towards solidating its growing reputation.

Founded by Ashwin Shah in 1996, Duck and Cover (named after an ill-informed public information film) started as a small, design-focused clothing company that aimed to provide fashion aware individuals with an alternative to the â€˜urban uniformâ€™ style that prevailed at the time.

Duck and Cover quickly developed a loyal following, attracted by the subtle branding, attention to detail, finish and quality, in cosmopolitan cities such as Manchester and Leeds.