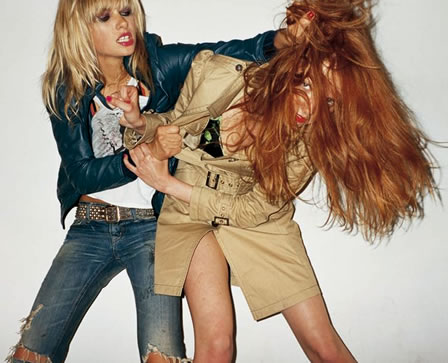 Hysteric Glamour isÂ a quintessential Japanese fashion brand. The brand is heavily influenced by all things AmericanaÂ but has that added Japanese twist which only the Japanese can create.

Design concept of Hysteric Glamour is based on the 1960â€™s and 1970â€™s American cultures that influenced Nobuhiko Kitamura during his childhood, especially music, comics, automobiles, and mass media cultures such as package designs, neon signs, etcâ€¦.Â  He adopts those images into his imagination, which is expressed in his clothing line. There is not a fashion show held for Hysteric Glamour but the new collection is presented quarterly at Hysteric Glamourâ€™s exhibitions for each season.

Hysteric Glamour U.K. is started in 1991, which mainly features T-shirts made in the U.K. It can be found at selected boutiques in London and other European countries. Hysteric Glamour Hong Kong store was opened in 1999. This store carries the collection from Japan.

Hysteric Glamour is a clothing line for guys and ladies high teens to twenties. The line features daily wear such as T-shirts, jeans, jackets, tops, accessories.

Jam out for a good cause