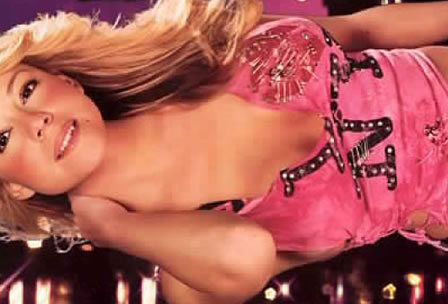 Put your finger on a map of downtown New York City and you can feel the pulse of Heatherette. Richie Rich and Traver Rains have created a lifestyle brand that truly cultivates the popstar in everyone. Glitter, sequins, and dreams have driven Heatherette every step of the way, transforming them from the quintessential downtown buzz brand to a respected and revered player in the fashion industry. Heatherette will take you from the red carpet to the street, uptown downtown and every stop along the way. â€œTHIS IS HEATHERETTE!â€

Heatherette came out with a bang in late 1999 when Richie and Traver began collaborating on t-shirts and leather goods as a hobby on their living room floor. Richie showed up at a party in one of his own customized leather tops and caught the attention of a buyer at the downtown store Patricia Field who ordered twenty of them on the spot. The exposure at Patricia Field led to an almost instant celebrity following. Rapper Foxy Brown personally asked Richie and Traver to design a custom outfit for her to wear to the MTV Video Music Awards. The word spread and soon Gwen Stefani was featured wearing one of their tops in Entertainment Weekly, Rich and Rains found themselves on tour with Aerosmith creating nightly wardrobe magic, and a young not-yet famous Paris Hilton was buying Heatherette creations off the rack as fast as the boys could make them. Patricia Field asked Richie and Traver to create one of their â€œNameâ€ shirts for Sarah Jessica Parkerâ€™s character on Sex and the City. The now famous Heatherette â€œCarrieâ€ t-shirt was featured worldwide in HBOâ€™s massive Sex and the City ad campaign.