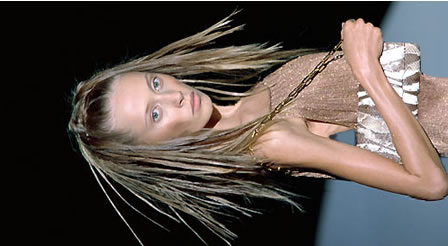 “Giorgio Armani, the world’s most famous designer, on Thursday blamed stylists and the media for the fashion industry’s obsession with ultra-thin women. In London to host a music and fashion extravaganza with stars Beyonce, 50 Cent and Bono, Armani said no girl needed to be anorexic in order to be fashionable.

“I have never wanted to use girls that are too skinny. I prefer girls that show off my clothes in the best way,” Armani told Reuters Television. “Unfortunately though, the stylists and also the media have interfered and they now want models that are incredibly thin.”

A debate about models’ weight has shaken the fashion world in recent days since Madrid banned excessively thin women from its catwalks after accusations their appearance may cause eating disorders in young women. Armani, whose client list spans Hollywood to high finance, is a bellwether for the industry and the most powerful fashion insider yet to speak out on the weight debate.

“No one thinks that for a girl to be fashionable she needs to be anorexic, that she must not eat. I will only take on healthy girls,” he said.

Armani made the comments on the red carpet of one of the most anticipated events of the fashion calendar and the hottest ticket of this week’s London Fashion Week.”