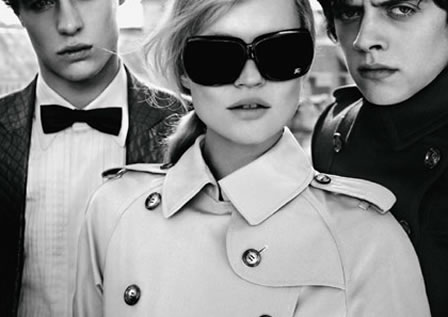 Burberry was founded in 1856 and this year celebrates its 150th anniversary. This yearâ€™s campaign, created in Burberry’s now signature black-and-white, has an extensive British cast spanning the generations. Burberry Creative Director, Christopher Bailey, celebrates the brandâ€™s roots in the autumn/winter collections through exploration of the richness of Burberry cultural history, heritage and rich portfolio of icons.

The Burberry family has been reunited for this shoot, which took place in London, the home of the brand. For the first time Burberry models Kate Moss and Stella Tennant feature together in the same campaign. The historic cityscape of the capital serves as the backdrop to the shoot. Photographer Mario Testino who has shot the campaigns since Spring/Summer 1998 is once again behind the camera.

The cross generational aspect of the brand is highlighted by the several generations of its cast members; Stella Tennant and her daughter Jasmine, Bryan Ferry and his sons Otis, Isaac and Tara, Lady Jacquetta Eliot and her son Louis. There is a nod to British cultural heritage of the past through legendary 60s model Penelope Tree, 70s singer/songwriter Bryan Ferry and David Baileyâ€™s son, Fenton, an up-and-coming photographer. The enduring synergy between music and fashion are represented by Bryan Ferry and Brit band Kasabian and singer/songwriter Louis Eliot. Other links to the Londonâ€™s past and future include Edie Campbell daughter of fashion editor turned architect Sophie Hicks and Alice Dellal daughter of celebrated 70s model Andrea Dellal. Top British contemporary models included in the campaign are Lily Donaldson, Tom Guinness and James Jamieson as well as up-and-coming actors Max Irons, son of Jeremy Irons and Leo Gregory.

As inspiration for the autumn/winter collections, Burberry Creative Director Christopher Bailey looked at the Burberry archives and translated them. The look is elegant and refined but always staying true to the real English style with a sense of dishevelled elegance. The collections reference the outdoors, countryside and open spaces and reflect Burberryâ€™s heritage in functional outerwear including the classic Burberry trench coat, Burberryâ€™s heritage of sartorial elegant tailoring, inspired by our historic menâ€™s made-to-measure suiting.

The key bag of the season is the Burberry Manor bag that is carried by both Kate Moss and Penelope Tree.