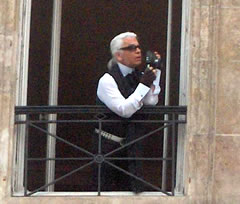 Ding-Ding, round one for the ultimate pink punch-up! Sir Elton John and Fashion Queen Karl Lagerfeld are reputedly in the midst of a major “Tiaras at Dawn” conflict.

Facts, as always, are rather vague. Nonetheless, it appears the conflict started when Karl “The Abominable Gay Man” Lagerfeld snubbed the wedding of Sir Elton John and David Furnish because of extreme security measures at the after party celebration. Karl Lagerfeld reputed said:

“I refused to go to Elton’s civil ceremony. I got a paper saying no gifts for the couple. Cameras are forbidden, cell phones are to be deposited at the arrival. No smoking. I will not go where things are forbidden and I’m told to behave. They say it’s security – I went to The White House, I went to the court of Monaco, and I never got this. You feel not like a guest. You feel like an unpaid extra. You’re hostage for a party.”

No doubt the girls will soon kiss and make up; let’s face it, their wigs are actually brother and sister, so these two super-queens are albeit related!