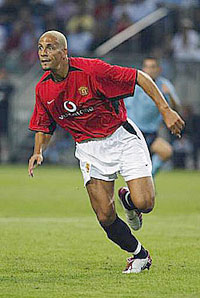 The question recently arose asking who is the ultimate male clothesÂ·horse — which guy has the best body for wearing and modeling clothes? And the name which came up most frequently was Rio Ferdinand, the Manchester United and England soccer star.

Rio Ferdinand, born on 7th November, 1978, in Peckham, South London, attributes his elegant stature to his formative training as a ballet dancer! The Manchester United and England defender revealed he turned down a five-year scholarship to ballet school. Said Rio: “It was like a drama school but you had to take part in ballet as well. I never admitted that as a kid but now I’m older I can admit something like that. I’ve always been involved in performing arts and, hopefully, in some shape or form, ballet has helped me – you’ve got to have balance to stay on your feet well. I’ve always been interested in the performing arts. I love music and I love performing. I probably would have done something like that if I didn’t play football, I was really into drama at school.”

At 187 cm in height and weighing a lean 88 kg, Rio Ferdinand’s statuesque frame has helped to launch an impressive list of high-profile media campaigns. If Rio does have the ultimate body for wearing and modeling clothes perhaps the yin-yang nature of his ballet and soccer training validates the principle of Universal Balance — a concept regrettably overlooked by too many fashion designers.