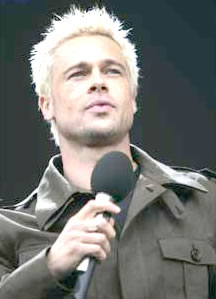 The fashion rumor-mill is rumbling and if speculation is to be believed Edwin Jeans are ready to battle the might Levi’s for global denim domination. Edwin Jeans has something of a reputation of being the Levi Jeans of the East and has held a dominant position in the Japanese denim market for many years which a great many fashion commentators attribute to superior product quality and intelligent advertising based around the world’s sexy man, Brad Pitt.

Brad Pitt was the face of Edwin jeans in Asia from 1996 to 1999 and helped the brand establish itself as a major denim force. In the televised advertisements, Brad Pitt sings of the wonders of the Edwin Jeans 503, which he apparently mispronounces. Although Brad Pitt refuses to appear in American commercials, he appeared in a long list of Asian Edwin Jeans commercials. Edwin Jeans were reputedly very disappointed to lose their star celebrity back in 1999.Recently there’s been talk of Edwin Jeans expanding it’s reach across the pacific. The brand, it is rumored, believes its product is able to compete outside its long established regional territory and compete on the global stage. Edwin Jeans does have a historical base in Europe and although they are the leading jeans supplier in Japan with 800 employees with their headquarters in Tokyo which is still located in the same 1947 building, Edwin Jeans has been present in Europe since 1979 and built a new European office is in Basel, Switzerland in 2003. That said, they have never been able to “crack” Levi’s American market.

The highlight of the Edwin Jeans SS collection is their Natural Indigo Fabric, all developed and made in Japan. Their Natural Indigo is hand dyed, woven on the old narrow looms and also features the Edwin Rainbow Selvage. The Edwin Rainbow Selvage is a historic feature that has been on Edwin Fabrics since 1963. They are extending the male jeans offer with 4 styles and enlarging the finish offer to 12 finishes by style. The female collection covers 6 bottoms styles and also tops. The finishes will be focused on worn 2nd hand looks or unwashed denim, also on rainbow selvage.

So if Edwin Jeans are planning to bring the fight to Levi Jeans in their own backyard, the question on everyone’s lips is will they be able to persuade Brad Pitt to break his decision not to appear in American commercials. If they can persuade Brad Pitt then who knows maybe they will be able to apply a decisive blow to Levi’s — it wouldn’t be the first time a Japanese company floored its American opposition!