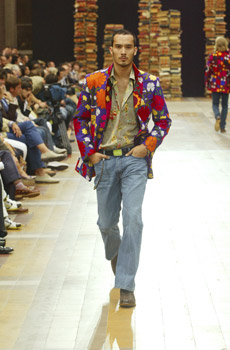 Initially, the question arises: whatÂ are Paul Smith Red Ear Jeans? Paul Smith tells us: the Red Ear collection is translated with a Japanese approach to detail, with embroidery, contrast stitching and using the best, high premium Japanese denims. Conversely, we need to know how classic Paul Smith Jeans differ from Red Ear Jeans. We can perhaps surmise they are not what Red Ear Jeans are?? They exclude more of a European look and feel with a propensity for classic elegance injected with the unmistakable Paul Smith traditional English twist. So does it all boil down to a battle between east and west craftsmanship and design or is that over-simplifiying the question? Ultimately, we have to conclude that there is no superior jean because there can be no real competition between equals. Whether you’re a Red Ear fan or a traditionalist your preference is subjective and has merit.