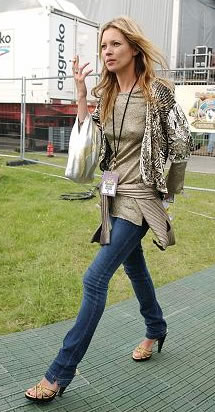 Supermodel Kate Moss has been voted best-dressed woman by the style gurus over at Glamour Magazine. The 32-year-old anarchic socialite topped Glamour magazine’s annual style list for the third year running. Not bad for a woman recently embroiled in a very public drug abuse scandal.

Kate Moss edged Sienna Miller into second spot followed closely by Ms Beckham in third. Victoria Beckham has moved up the rankings, perhaps in part due to her new found career as a fashion designer with Rock & Republic. Nicole Richie is the year’s highest climber, up 33 places to number four, which probably says more about Paris Hilton than it does about Ms Richie. Halle Berry is fifth, followed by Charlize Theron, Jennifer Aniston, Mischa Barton, Catherine Zeta-Jones and Nicole Kidman. On the flip-side, the worst-dress woman is Celebrity Big Brother housemate Jodie Marsh, followed by Jordan, Paris Hilton and Britney Spears.

So what differentiates the best-dressed from the worst-dress? What’s the criteria for judging who dresses well as opposed to who dresses poorly? Indeed, what qualifies anyone to publish such a judgmental and ultimately utterly subjective list? Perhaps this categorising says more about our society than it does about the personalities being judged; it’s like a glamorous form of cronyism! The judges spew forth their subjective views based on personal friendships and ambitions. Indeed, how can anyone, even renowned designers, issue a truly objective list of who dresses well as opposed to who dresses poorly. The very essence of true style is indefinable and personal; there is no objective criteria it’s all utterly subjective and varies from one person to another and that’s what makes fashion and style so attractive and inspiring. Maybe the girls at Glamour Magazine might consider an in-house best and worst dressed woman — this would provide them with a deeper understanding of what it means to label other woman best and worst.