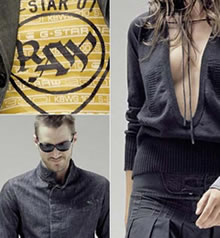 For many years now G-Star has been an edgy and widely respected denim brand. G-Star’s innovation and celebration of youth culture attracted a young and intelligent customer base which have remained loyal to the brand and its unorthodox fashion style. Recently, however, there have been murmurings of discontent amongst a growing number of G-Star aficionados and the reason is intriguing.

Ever since its inception back in 1989 the G-Star brand has been limited to a select number of respected retail outlets which helped evolve G-Star into an exclusive designer brand. The arrangement was truly symbiotic, G-Star was introduced to an intelligent and discerning fashion consumer and the exclusive retail outlets had another innovative brand to add to their inventory, everyone was happy, the G-Star brand, the exclusive retailer and the discerning customer. A winning and successful combination.

Then, inexplicably, G-Star decides to introduce its range into the High Street multiples that patently lack the kudos of the exclusive retailers and the once loyal G-Star customer base starts to question the brands credibility. How can an intelligent and discerning fashion consumer be seen wearing a brand that’s widely available in the High Street multiples? The answer is it can’t! So the murmurings of discontent intensify and the G-Star brand transfers to an entirely new customer base which is undoubtedly larger but certainly less loyal. So although G-Star maybe transferring it’s focus to a larger customer base which in the short-term may spike profits, in the long-term the brand will suffer because it will not only lose it’s traditional discerning customer base but the typical customer who shops in multiples is notoriously fickle and will move onto a new fad in no time leaving G-Star high-and-dry.

Ultimately the decision to embrace a wider customer base could prove catastrophic for G-Star and it could act as aÂ warning for other designer brands looking for a short-term “spike” in profits at the expense of their traditional customer base.