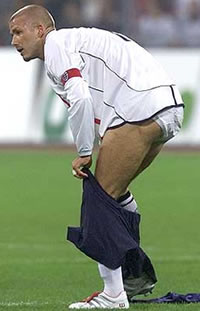 Rumour has it David Beckham could be signing a Â£1.1 million deal with Calvin Klein. Apparently Beckham, AKA Golden Balls, spends a grand each month on Calvin Klein Boxers or to be more precise Calvin Klein Pro Stretch Boxers and allegedly he wants an opportunity to show off his tackle – wink, wink!

Surely this is a genuine match made in heaven (unlike his marriage – only joking!); Golden Balls is indisputably the ultimate metrosexual and gay icon and Calvin Klein produce arguably the ultimate boxer shorts so on the face of it this is a sure-fire winning combination (unlike his team – not joking!). Perhaps the question on most peoples’ minds, even if they don’t want to admit it, is does David Beckham need any props to pose in a pair of CK boxers? Calvin Klein boxer short models have a certain reputation and Golden Balls will not want to let down the side, so perhaps a strategically positioned pair of rolled up Real Madrid socks will give Becks the necessary swerve.

Whatever the result, Calvin Klein will surely not pass up this once in a blue moon opportunity to expose their CK boxers to Golden Balls’ global fan base…. and there are undoubtedly a few guys in San Francisco, Brighton and Barcelona hoping Becks will expose his Golden Balls to Calvin Klein’s global fan base too!