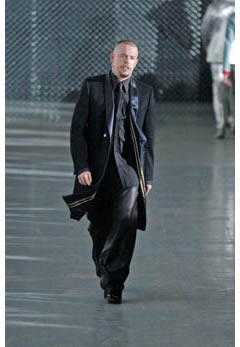 PUMAÂ® announces today a collaborative partnership with fashion designer, Alexander McQueen. The new line of men’s and women’s footwear created by PUMA and Alexander McQueen will launch in Spring 2006. Known for his innovative approach to fashion, Alexander McQueen is an established luxury brand with a strong international following. His ability to push boundaries and his intricate craftsmanship in his own collections makes him an ideal partner for PUMA.
“I have always had a great passion for trainers, so I am very excited about this collaboration with PUMA. I am confident that my design philosophy, combined with PUMA’s excellence in the field, will result in a totally unique product. I believe that this partnership will be a great success,” said Alexander McQueen.
The Alexander McQueen and PUMA Collaboration will include both men’s and women’s footwear and represents an opportunity for PUMA to further define the sport-fashion footwear market with a hugely influential fashion reference from Alexander McQueen. PUMA has always been an innovator in the world of sport-fashion, partnering with leading fashion brands and recently consolidating its position by opening a store in New York City’s Meatpacking District alongside Alexander McQueen’s flagship store.
“Alexander McQueen is one of the most creative minds in fashion and his collaboration with PUMA will make his work accessible to a broader consumer,” said CEO and Chairman of PUMA AG, Jochen Zeitz. “The collaboration will connect PUMA with the most front-end fashion innovators and take the concept of sport-fashion to the next level. Known for his ability to juxtapose influences, the fusing of sport and fashion was Alexander McQueen’s challenge, his response is an unexpected collection that is based on the union of tradition and technology.”
The collection will be unveiled during women’s fashion week in London in September 2005 and will be available at select high-end retailers globally in Spring 2006.
PUMAÂ® is the global athletic brand that successfully fuses influences from sport, lifestyle and fashion. PUMA’s unique industry perspective delivers the unexpected in sportlifestyle footwear, apparel and accessories, through technical innovation and revolutionary design. Established in Herzogenaurach, Germany in 1948, PUMA distributes products in over 80 countries.Â